2019 was undeniably a year of legendary chart toppers, who could forget Miley Cyrus’ catchy ‘Nothing breaks like a heart’, or Ed Sheeran and Justin Bieber’s hit ‘I Don’t Care’. However, one collaboration stood out from all the rest to become the most downloaded song of 2019. This was the hauntingly beautiful track ‘Giant’, performed by Rag ‘n’ Bone Man and electronic, music legend Calvin Harris. Not only was it the most downloaded track of that year, but also the music body PPL revealed that Giant was the most played song on U.K. radio stations in 2019.

This ‘giant’ track was co-written by Calvin Harris, Jamie Hartman, Rag ‘n’ Bone Man, and Conchord Management’s very own Troy Miller. It flew to fame overnight for its catchy lyrics and blend of baritone vocals with EDM beats, seamlessly mixing gospel with dance music. ‘Giant’ tackles some tough topics such as addiction and redemption, themes which clearly resonated with the public who could not stop downloading the track. Troy Miller’s writing often focuses on a powerful message and having greater meaning behind the lyrics. Clearly this is a recipe for success, as ‘Giant’ was nominated at the Brit Awards for song of the year and equally for the NRJ Music Award for International Song of the Year.

This liberal intertwining of genre is a key trait of Troy Miller’s, himself being a multi-instrumentalist, composer, conductor and producer. His own mixed music background, having trained both classically at Guildhall and also on the drums, has allowed him to write and produce tracks that truly express artists’ creative wishes without being bound to one medium.

Although mixing genres can be incredibly difficult, Troy’s argues that ‘listening is key’ and his success is owed to an extremely careful recording technique using largely analogue equipment.

“I always get a kick out of creating something uniquely special with everyone I works with, because I’m so interested in every aspect of music making, I likes to dig deep whilst keeping a healthy respect for the heritage of different styles.”

Troy also received a nomination for the Ivor Novello Award 2020 under the PRS for Music Most Performed Work category for his work on ‘Giant’. These awards recognise creative excellence in song writing and screen composition. 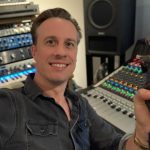